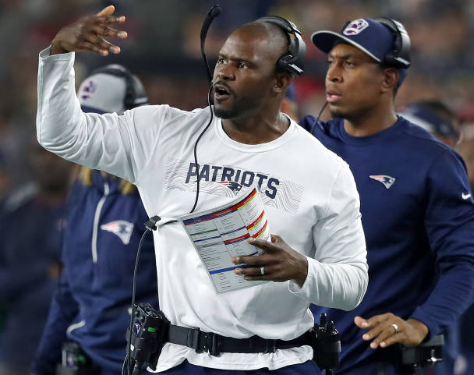 Flores spent 11 years as the assistant coach to Belichick. Brian Flores finished as the linebackers coach in 2018. Flores’ career ended when he was fired by the Miami Dolphins on January, 10, 2022. Despite the fact that Flores helped the Dolphins win two consecutive seasons, he was unexpectedly fired. This was the first time the Dolphins had achieved such success since the year 2002-2003. Brian Flores was then offered a job in the offseason by the Pittsburgh Steelers. He was to take on the position of their senior defensive assistant or linebackers coach for the 2022 season.

It was not an easy life of luxury for Flores as he was one of the five sons of Honduran immigrants. These people were not always well-off and struggled to earn their means of sustenance. Flores described their apartment and neighborhood as a rather tough place to live. Since their elevator did not work, they had to walk 20 flights of stairs to their public housing unit. Crime and violence were also rampant while growing up in Brownsville. His younger brothers despite their menial possession were mugged. However, Flores’ parents were fully determined to give their children the best life filled with numerous opportunities.

His parents were Raul and Maria and they endowed a lot of love, affection and respect upon Flores and his four brothers. The set of values they imparted to their children shaped the way Brian Flores is today as a person. His parents immigrated to the United States in the 70s. It was their main aim to give Flores and his brothers a better life away from poverty. Flores mentioned his family in his introductory speech at a press conference. His aunts, uncles and all other descendants had one thing in common. They were never rich in material things or money but they all were rich in love.

Flores attended the Poly Prep Country Day School in Brooklyn. Then from 1999 to 2000 he played football at Boston College as a linebacker. He actually started off as a defensive back here and then switched to linebacker to finish out his time. Flores even encountered the Boston College legend, NFL MVP, Matt Ryan. Flores was a fifth year senior during Ryan’s freshman year. According to Ryan, Flores was a tough football player. He even terrorized the young scout-team quarterback early in his career. He sustained an injury after that which prevented him from playing in the National Football League (NFL).

This injury withdrew his golden opportunity of going pro. He went through a quad injury just prior to his Bowl game with the Eagles and never played again. Brian Flores grew up as a big supporter of the New York Giants and the New York Mets. Flores’ origins were never sophisticate. So his rise from a rough neighborhood in Brooklyn to becoming the head coach of Miami Dolphins is an inspirational story. He became the Dolphin’s coach after he helped the New England Patriots win against the Los Angeles Rams at the Super Bowl. The victory was with a 13-3 and he end his season as a defensive play caller for Bill Belichick.

This was on February 4, 2019 when the Patriots won their sixth Super Bowl title. Hence after a total of 15 years of serving as the assistant for Patriots, Flores got his new job offer. He was makes the twelfth Head coach of the Dolphins. This was a great achievement as he was the fourth Latino in NFL history to be makes the head coach. Therefore, he was following in the footsteps of Ron Rivera, Tom Fears and Tom Flores. The last of these was also the second former Belichick assistant to coach the team. Similarly, Flores’ abilities had him being sought out by other teams. These included the Green Bay Packers, Cleveland Browns and Denver Broncos for their head coaching positions. Before hiring Flores, the Dolphins also considered hiring the Kansas City Chiefs offensive coordinator, Eric Bieniemy. Also team assistants, Darren Rizzi and Dowell Loggains for the same spot.

Flores signs a Lawsuit against the NFL

The basis of Flores filing a class-action lawsuit against the NFL and other teams was due to alleged racial discrimination. The lawsuit was against the New York Giants, Dolphins Organizations and Denver Broncos on February 1, 2022. This lawsuit had its claim on text messages from the New England Patriots coach Bill Belicheck also reported by the media. This was the proof that the New York Giants showed bias by hiring Brian Daboll without interviewing other minority candidates.

The Giants had scheduled an interview with Flores on 27th January. However, they disregarded this and instead chose Daboll on January 23. Flores was also disappointes when he was makes a fool of in another sham interview in 2019. He blames John Elway and the Broncos management when they called him for an interview as the head coach. They apparently seemed hungover and arrived rather late for the interview. Flores had all the evidence proving the genuine interest that Broncos management had in his capabilities. This is because five Broncos officials flew overnight from Colorado to Rhode Island for this purpose. They wanted to work out the only time that was suitable for Flores to be available. They had spent almost 3.5 hours interviewing him and had made detailed notes showing their full intention of hiring him.

Furthermore, in the lawsuit Flores also puts charges against the Dolphins team owner, Stephen Ross. During Flores’ tenure working alongside the Dolphins, Ross ordered him to cave in and lose the game intentionally. Flores was gives an award of $100,000 for every game that the Dolphins lost. This was done so the Dolphins could get better draft picks in the upcoming season. They could also tamper with the quarterbacks before free agency without any explicit objection.

Nevertheless, Flores refused to tank in and instead made Dolphin have two consecutive wins. He even rejected the offer to tamper and thus he claims that Ross deliberately fired him. According to the Palm Beach Post, the quarterback was Tom Brady. So the lawsuit will seek compensation for the damages and injunctive relief. This will be through hiring, retention and termination and total transparency. The practices for hiring coaches and executive positions in the NFL need to be open to inspection at all times.

The former Miami Dolphins head coach was offer a new job on February 19, 2022. He was to be the Pittsburgh Steelers senior defense assistant and linebackers coach under head coach Mike Tomlin. Steelers head coach expressed his excitement on Flores joining their coaching line. He stated Flores’ experience for developing and teaching defensive players during his time in the NFL is crucial.

With all that history Flores would certainly prove to be an asset for the Steelers. Flores’ resume speaks volumes about his expertise and the skills he will impart to his new team. Everyone at the Steelers seemed very eager to welcome Flores and to work with him. This hiring of Flores boosted the defensive unit. It could be observe through the promotion of Teryl Austin to defensive coordinator. This was after Keith Butler, who was also the coach for the team’s outside linebackers, retired. Flores had spent the rigorous past three seasons as the coach for Miami Dolphins. He made a record of 24-25 just before being fire. Prior to that he was also the defensive play caller for the New England Patriots. They were include in the Super Bowl LIII.

At the age of 40 Flores signed a lawsuit against the Dolphins and three other teams. It was for discrimination in the interview process wth New York and Denver. This was also related to his unjust firing by the Miami Dolphins. For opposition to Flores’ claims, the NFL has also taken necessary measures in defense. They hired a law firm with the former U.S. Attorney General, Loretta Lynch to save their reputation. Despite being hire by the Steelers, Flores hasn’t backed off in his fight. His lawyer, Douglas H. Wigdor states that the lawsuit against the NFL will continue. He made a statement on Saturday. Flores might be occupied and focused on his new position, working with the Steelers. Still, he is adamant to proceed with this struggle against racial discrimination so it can end for good.