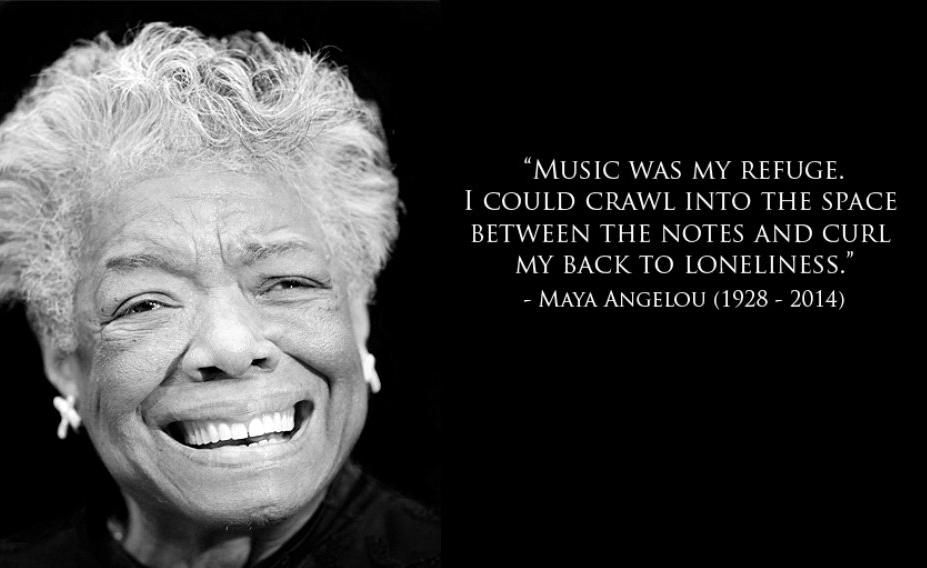 Who was Maya Angelou?

This inspiring woman was a poetess, autobiographer, singer and a civil rights activist. Maya Angelou quotes influence everyone around the globe with her bold themes regarding freedom and empowerment. She portrays elements of her life as an American black in her writings. They deal with themes of racial, economic and sexual oppression. Although Angelou was born in St. Louis, she spent most of her childhood in rural Stamp Arkansas with her paternal grandmother. When she was not yet eight, she was raped by her mother’s boyfriend.

When she spoke about it, her rapist was murdered. These traumatic incidents were shocking enough to leave her mute for many years. Her autobiographies, especially the most eminent one of them,

“I know why the caged bird sings,”

majorly focus on her early life. It reflects on the power and grace in facing discrimination. This helped her earn acclaim and a nomination for the National Book Award. Her other volumes include Gather Together in My Name, Singin’ and Swingin’ and Gettin’ Merry Like Christmas. All God’s Children Need Traveling Shoes, The Heart of a Woman, A Song Flung up to Heaven and Mom & Me & Mom.

Her poetry is heavily based on personal history. And Her collection includes Just Give Me a Cool Drink of Water ‘fore I Diiie, And Still I Rise, Now Sheba Sings the Song and I Shall Not Be Moved. Her quotes can be derived from all these works of hers. Including the children’s books that she wrote. Like My Painted House, My Friendly Chicken and Me, Life Doesn’t Frighten Me and The Maya’s World series. Angelou even departed advice to women in the form of an anecdote.

This she wrote in a Letter to My Daughter whereas her only biological child was a male. Quite interestingly, she was referred to as “Dr. Angelou” despite her lack of college education. In 1981 she became a professor of American Studies at The Wake Forest University, Winston-Salem, North Carolina. It may be thought that many of Maya Angelou’s quotes are derived from her public speeches or poems.

This is when she was invited to compose and deliver a poem called “On The Pulse of Morning.” The auspicious occasion was the inauguration of U.S. Pres. Bill Clinton in 1993. In her poem “A Brave and Startling Truth,” she celebrated the 50th Anniversary of the United States. She also lauded Nelson Mandela’s lifelong effort after his death in the poem, “His Day Is Done.” Her words were held in such high regard that in 2011, Angelou was awarded the Presidential Medal of Freedom.

Maya Angelou’s quotes are read by most people since she was a prolific writer who wrote many books and essays.

She wrote in exact words,

“All my life, my work, everything I do is about survival. Not just bare, awful, plodding survival, but survival with grace and faith. While one may encounter many defeats, one must not be defeated.”

She also starred in many plays, movies or television shows. She even received awards like the Spingarn Medal in 1994. In 2000 she went on to win the National Media of Arts award.

“On the Pulse of Morning,” goes like, “Here on the pulse of this new day. You may have the grace to look up and out. And into your sister’s eyes, and into Your brother’s face, your country. And say simply Very simply. With hope – Good morning.”

She was a philanthropist, visionary and a celebrated world leader. She was a universally admired figure especially at the time of her death. All her teachings, spoken word and writings explore the themes of being an African American woman in the United States.

Important life lessons can be found in Maya Angelou’s quotes.

“If you don’t like something, change it. If you can’t change it, change your attitude.”

This shows that humans have a lot of authority and power over their lives. This is mirrored in their actions, beliefs and words. You can always find another way to change your circumstances. Humans have the capacity to adapt and control our lives in the way that we want. Fate and destiny have some part in how our lives turn out to be; it is active effort that makes all the difference. Thus, be very vigilant in what choices you make or the achievable goals that will be significant for your growth.

Another of her quotes is,

“Courage is the most important of all the virtues. Because without courage you can’t practice any virtue consistently.

You can practice any virtue erratically, but nothing consistently without courage.” This explains how bravery is considered to be the most important skill and trait that people prefer choosing in their everyday lives. Some examples of this include how you can counter peer pressure or stand up for someone who is in a vulnerable position. Mustering up courage to do the right thing requires a lot of effort because unlawful actions have been so casually normalized. Our culture and media have made it apparent how negativity and fear prevails through society. For instance through a high crime rate, political turmoils, family feuds, betrayal and jealousy. According to Angelou true courage is overcoming the fear and accepting the right situation as it is.

Angelou’s Adages and their meaning

Being patient was perhaps one of the ultimate weapons at Maya Angelou’s disposal which she explores in her quotes.

Good things indeed come to those who wait. This is preached so often in the modern world even if people rarely follow it. Technology and time efficiency have eradicated the trope of perseverance. Everything has just become quicker and faster. People keep rushing even in simple tasks that can be done with joy and peace. There is something unsettling like not reveling in the things that people used to have a liking for earlier. How we are unwilling to put in the time and effort for achieving our dreams.

Be it the business you have always wanted to start or the novel you had planned to write. Make it happen. Let procrastination not pose any more hurdles in your path.

“Bitterness is like cancer, It eats upon the host. But anger is like fire. It burns it all clean.”

It shows how psychologically damaging it can be holding onto bitterness and resentment.

And It may get toxic when it all builds up in one’s mind. This can negatively impact your daily life. As in your work, relationships and the manner in which you treat people. You can instead turn your anger into some masterpiece. Like channeling your energies into productive activities like writing, singing or creating art. This can be a transformative process and you can move forward by becoming the person you are meant to be. Use your anger as a tool and catalyst for betterment.

“If you find it in your heart to care for somebody else, you will have succeeded.”

This saying is Angeou’s foremost belief of having and cultivating compassion for each other. It is how optimistically she saw humanity. People showing kindness to one another and showing up for others when needed. Caring for others and putting their needs first when they are in a vulnerable position should be given the due importance. Everyone desires to be loved and cared for. This cements the human connection at its core.

One of Angelou’s many teachings include maintaining a strong work-life balance. This is showcased in the fact that you should appreciate every aspect of life and be satisfied with the blessings that you have. To be committed and focused in life to be successful in the long run. Life and time both can pass away in the blink of an eye without you even getting a warning.

Thus, make the most of what you have and spend your time laughing with your loved ones. Comparing your progress with others or setting unrealistic standards for yourself may only pose major hurdles in your path. Do not waste your precious and cherished moments in pain and darkness. There is always a light at the end of the tunnel and everything turns out to be just fine. Take risks and take action. Do not remain solitary or hesitant. Don’t make the mistake of living your life imbued with anger and lifelong regret.

According to Angelou, forgiveness and mercy were two most important traits for the survival of humanity.

She lays emphasis by,

“It’s one of the greatest gifts you can give yourself, to forgive. Forgive everybody.”

Forgiving others has a two-fold advantage. It not only eases up the tension between both the parties but shows amazing benefits to one’s own self. It leads to all built up bitterness and grudges being eradicated. Peace can settle and no harsh words need to be uttered. Forgiveness is an extraordinary gift and has the power to restore even crumbling relationships be it in friendship or between partners. This doesn’t have to apply to all contexts such as something serious like a murder or betrayal. However, it is recommended to forgive in case of any misunderstanding or trivial disagreements.

By being the bigger person you can call on to forget any bad blood between you and the other person. You can thus exert the energy that you spent in hating the other person into more productive tasks.

Despite all logic and reasoning, it is our emotions that sway us whether consciously or unconsciously. This drives our daily actions, behavior and the way we interact with others. Hence, it is essential to take into consideration how others feel. We must be cognizant of the fact that even very casual conversations and words can bring about either positive or negative effects. Exert a positive influence on people so they remember you for all the good things you said to them.

To live life peacefully one must stay away from all sorts of situations that cause a breach of trust or instill animosity.

This advocates that a person must be devoted to set their path straight and be the most well-rounded and loving person. There is a very fine line between being confident and arrogant. You must not let the world’s joy and materialistic things affect you. Pride and over ambitiousness can have serious repercussions. Your energy and strength must be focused on becoming a better version of yourself. This applies to both your personal and private lives.

Do not waste your time cultivating enmity with others. Constructive criticism is appreciated but be vigilant of the jealousy that sparks hidden beneath careless jokes. Thus, this will help you distinguish between friends and foes. Something you will go on to value in future as you grow older. Never sacrifice your self-esteem for the sake of any relationship. Your feelings are temporary and may fade with time but it is your dignity that cannot be restored once hurt.

Do not let anyone cost you your peace by walking all over you. Value those who make you feel worth fighting for and let go of anything that disturbs your peace. Being insecure can negatively harm your persona and confidence level. It triggers your darkest of fears and brings them in direct confrontation with you. The very first step to self-acceptance is letting go of anyone who makes you feel you are not good enough.